Because increased attacks from militant Islamist groups in the Sahel coupled with cross-border challenges such as trafficking, migration, and displacement have prompted a series of regional and international security responses. 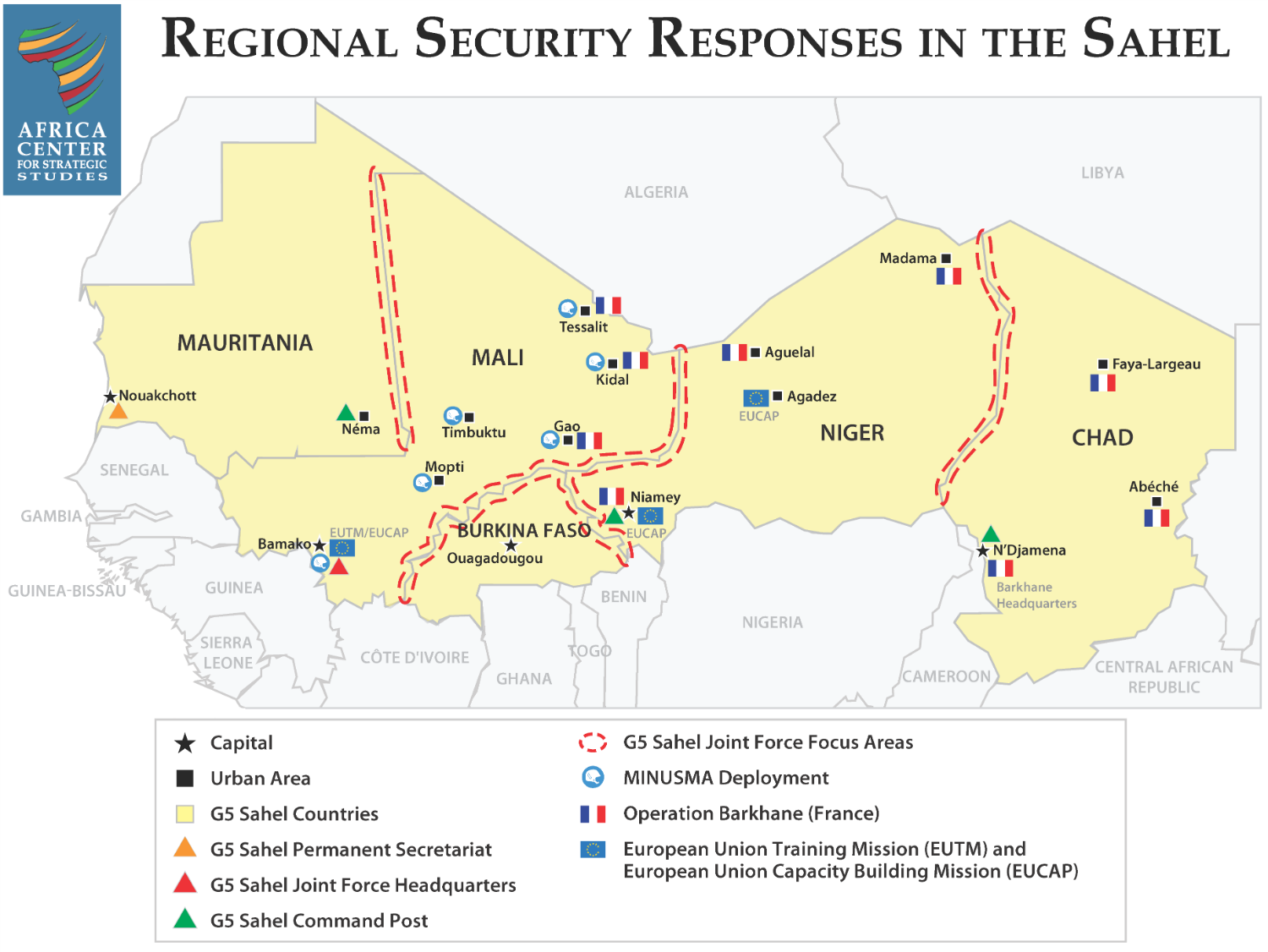 In response to the growing security threat posed by militant Islamist groups in the Sahel, the following major regional security initiatives have been undertaken in the region:

The United Nations Multidimensional Integrated Stabilization Mission in Mali (MINUSMA) was established by UN Security Council Resolution 2100 on April 25, 2013. Its mandate is to provide security in support of the political process to help stabilize Mali following a push by militant Islamist groups to seize territory in the north of the country. Fifty-seven countries contribute with military personnel, including Burkina Faso, Chad, Bangladesh, Senegal, Egypt, Togo, Niger, Guinea, Germany, and China.

Military personnel are deployed to 13 sites covering 3 sectors, with headquarters in the capital Bamako:

Since 2013, there have been 191 fatalities among MINUSMA forces, including 118 from hostile forces, making this the deadliest peacekeeping mission in the world today.

The G5 Sahel is a subregional organization established in 2014 as an intergovernmental partnership between Burkina Faso, Chad, Mali, Mauritania, and Niger to foster economic cooperation and security in the Sahel and to respond to humanitarian and security challenges, including that of militant of Islamist groups. In 2017, the G5 launched a Joint Force (Force conjointe du G5 Sahel, FC-G5S).

Comprising 5 million square kilometers—roughly half the land area between the European Atlantic coast and Moscow—the G5 countries have deployed troops across 3 sectors (West, Central, and East), with each sector composed of 2 to 3 battalions. Each battalion will consist of 650 troops, for a total of 5,000 troops.

In addition to the member countries, the Force is supported by a coalition of 26 countries and the European Union.

In January 2013, France launched Operation Serval in Mali to counter a militant Islamist insurgency that threatened to topple the government in Bamako. In August 2014, Serval was transformed into Operation Barkhane, which has about 4,500 soldiers throughout the G5 Sahel countries and a budget of about $797 million per year. It has three major bases: in N’Djamena (Chad), where the headquarters and joint staff are located, as well as command posts in Gao (Mali) and Niamey (Niger).

In October 2018, Barkhane expanded its area of operations to Burkina Faso at the request of the Burkinabe government, which is facing a rise in militant Islamist group attacks.

EU Missions in Mali and Niger